Moody, the chatbot that measures mood of Axys Consultants Group’s employees who are in teleworking

Numerous solutions have been implemented in order to facilitate teleworking but one of the bigger challenges is to remotely manage teams.  For that, Axys Consultants Group has developed a simple and playful chatbot. It permits in one click to know the mood of each collaborator and to help who might want to. 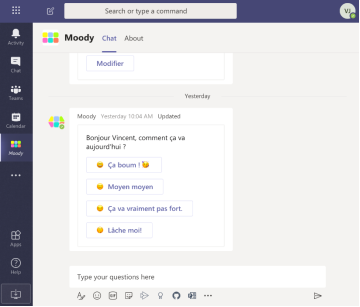 Despite conference and visio calls, it is sometimes difficult to know the real state of mind of employees in a particularly anxiety inducing period in which we are deprived of physical interactions’s feed-back. However it is important to support those who need it and who would not take the initiative of contact their manager.

AI Lab has imagined a playful and simple solution that takes the form of a chatbot.

Regularly, when a collaborator connects itself to its computer, the chatbot calls it by asking him how it feels and three simple smileys appear:

Everything is fine, I am in a good mood (green)

I am holding out, but it is hard/long. (orange)

I do not want to answer to you.

A “comment” square also permits to who might want to express themselves longer on their state of mind and to ask for being contacted.

Each day associates receive a recap of each collaborator’s mooed, its evolution trough time, and also names of those the ones who do not want to being contacted and the ones who did not ask to but often answered with a “orange” or “red” smiley.

“How to take care of our collaborators and create a good climate for keeping our projects’ carrying out ? A systematic call made by a manager could have a contre-productive effect and be assimilated by the collaborator to a command/control with the induced pressure. In order to avoid these calls, we quickly developed a little bot for assess our teams’ state of mind.” explains Jean-Luc Marini (AI Lab Director) and pursues :

“Baptized Moody, this bot has been developed for Teams in 5 days ! It permits to easily ask to collaborator how does it feel, by proposing to tick smiley that is associated to its mood and to express itself via a square case if it want to. But it can also disactivate it.”

After three weeks of use, feedbacks are positive ones : among 250 employees, 80% state that they are fine, 3% have demonstrated the desire of being contacted. Only one has blocked the chatbot and 3 preferred to not answer.

User of Moody Grégory Saccomani, is delighted by this chatbot  : “Moody’s operating system has been very-well thought by our management and by the AI Lab’s teams. It is not intrusive at all, sometimes funny (teams have worked on the integration of “Easter egg”, a function that is hidden into the program) and concretely it does very well its work ! During this restless period, it is not always easy to keep morale, and I sometimes had, for my part, days off and my manager has quickly come back to me in order to know how I was doing due to the alerts received by Moody (and everything is fine now I reassure you). This tool is a useful help during this moment and will be, I am sure of that, a 2.0 tool available from managers of Axys Consultants Group.”

« Regarding the evolution of morale, we note that our collaborators hold up even if their state of mind erode lightly with time. Moody having been very well welcomed, we are considering to pursue the experience after the decontainment because it is a simple way to permit to everyone to express itself beside any hierarchical link”, concludes Laurence Suprano, Associate Director.